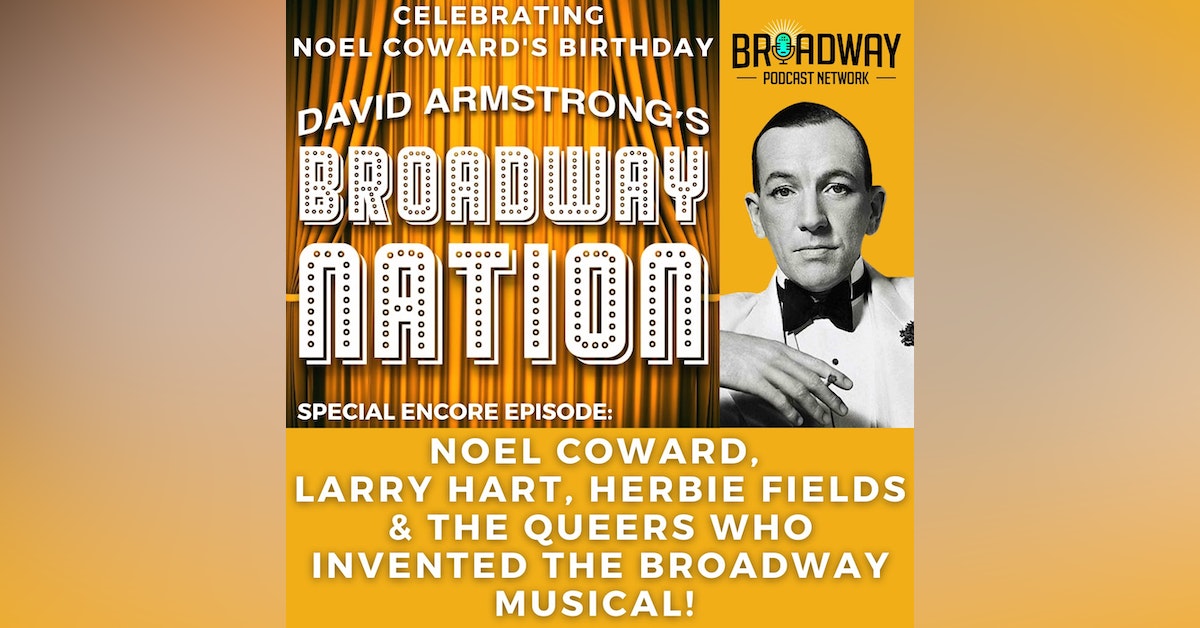 This week’s special ENCORE Episode is in celebration of Noel Coward’s birthday!

Noel Coward was born just outside of London on December 16, 1899, and in fact he was named him Noel because his birth came so close to Christmas!

For some reason, ever since I was very young, this lower middle-class, midwestern American gay boy from Cincinnati, Ohio has had a strong affinity for everything Noel Coward — his songs, his plays, his books, his movies, his TV performances, and his musicals.

Why? I have no idea. I am not even sure I can pinpoint my first exposure to his work — but certainly by the time I was in high school I was obsessed with Noel Coward.

My best guess is that in 1972, when I was 13 years old (and already an avid cast album collector), the original cast album of the new hit off-Broadway revue Oh Coward! was released. This was a deluxe 2 record recording of the entire show which had been devised by Roderick Cook and made up of dozens of Coward’s songs, poems, revue sketches, and even brief excerpts from his plays. All of this was performed by a terrific three-person cast made up of Barbara Carson, Jamie Ross and Cook himself.

Of course, I didn’t immediately understand all of the context and references — I just knew that I loved it.  What I certainly didn’t understand at the time was that the tittle was a cheeky play on Oh Calcutta!, the infamous nude revue that was causing a sensation at the time. I also didn’t know that Noel Coward’s last public appearance before he died was attending a gala performance of Oh Coward! in NY with Marlene Dietrich as his date.

I played that cast album until it was worn out, and at some point I also acquired the cast album to the hit London revue Cowardy Custard which opened that same year.

Over the years I have had the enormous pleasure of directing Oh, Coward! three times and I would jump at any chance to do it again. And I also directed Private Lives once, as well. Home sweet heaven for me would be to mount a major Noel Coward Festival! Who wants to join me?

This episode is the second of several that highlight the many queer men & women who played a crucial role in the invention of the Broadway musical.

﻿You can find the others at www.Broadway-Nation.com, on the Broadway Podcast Network and wherever you listen to podcasts. Start with Episode 5: Cole Porter & The Queers Who Invented Broadway!