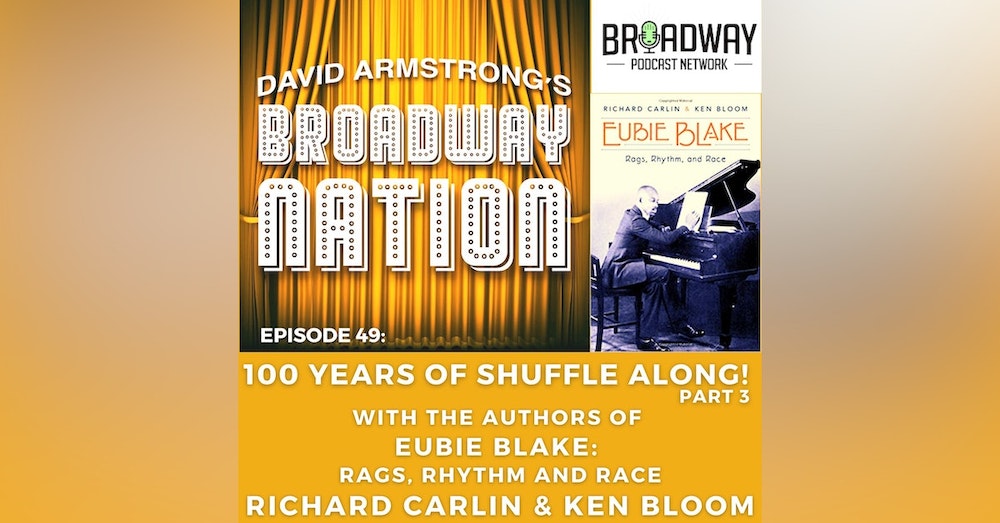 If you love this podcast and want to delve even deeper into the world of Broadway musicals, I invite you to become a member of the Broadway Nation “Backstage Pass Club".

For as little as $7.00 a month members will receive exclusive access to never-before-heard, unedited versions of every Season Two interview, and many from Season One as well!  I often record at least twice as much conversation as ends up in the public episodes, and this includes additional in-depth conversations with my frequent co-host Albert Evans. You will also have the opportunity to ask us any questions about Broadway musicals that you would like to hear answered and propose topics you would like me to cover -- all of which I will incorporate into a special series of “Ask Me Anything About Broadway” episodes. Last, but certainly not least, you will receive special “on-air” shout-outs and acknowledgement of your vital support of this podcast.

And if you are feeling especially enthusiastic about Broadway Nation there are Patron and Producer levels available as well.

Again, it is very simple to join at this link:

I thank you in advance for your generous support of Broadway Nation.

This year marks the 100th Anniversary of Shuffle Along!, the groundbreaking musical that kicked off an entire decade of vibrant black musical theatre on Broadway which included more than a dozen shows that were created by black songwriters, black bookwriters, black producers, black directors and choreographers -- and these shows brought hundreds of black actors, singers, dancers, and musicians to Broadway.

This landmark is being celebrated with the release of two wonderful new books. Earlier this season in Episodes 37 & 38, I had the great pleasure of chatting with author Cassen Gains about his book: Footnotes: The Black Artists Who Rewrote the Rules of the Great White Way.

Today my guests are the co-authors of the first full biography of Shuffle Along’s composer: Eubie Blake: Rags, Rhythm and Race.

Richard Carlin is the Grammy Award-winning author of numerous books on popular music, including Country Music, The Big Book of Country, and Worlds of Sound: The Story of Smithsonian Folkways.

Ken Bloom is the Grammy Award-winning author of Show and Tell: The New Book of Broadway Anecdotes, Broadway Musicals: The 101 Greatest Shows of All Time, and Broadway: An Encyclopedia. He is the co-founder of Harbinger Records, has been a Broadway correspondent for NPR and the CBC, and has directed and produced shows at Town Hall, the Brooklyn Academy of Music, among other venues.