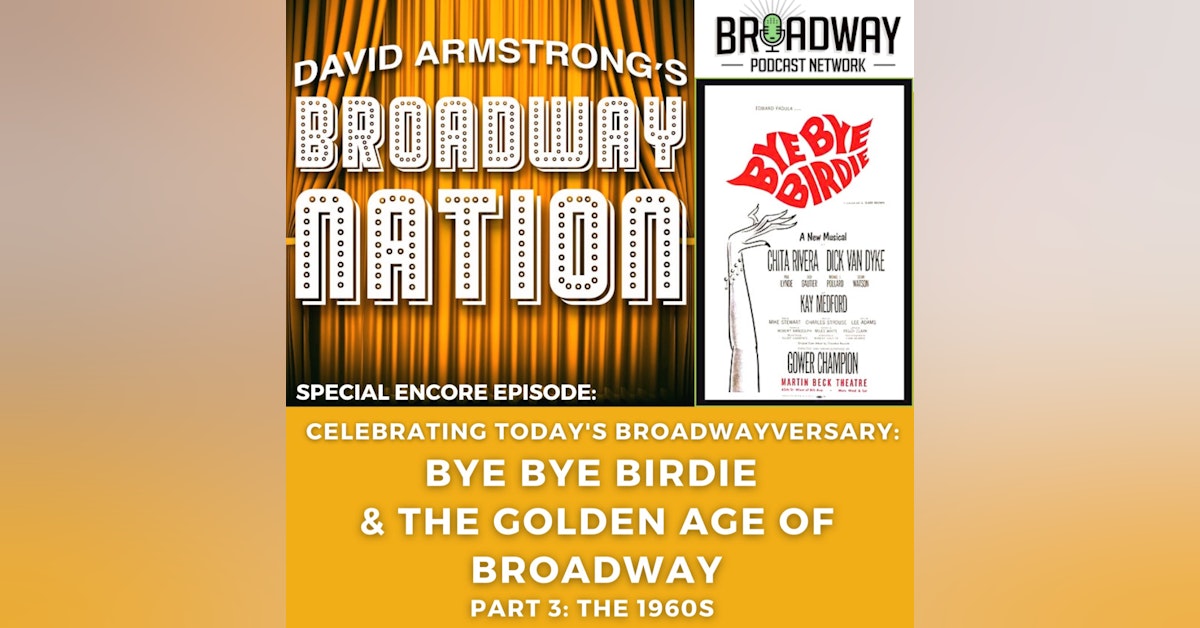 This is a special Encore episode of Broadway Nation. I am reprising it not only because I think this is one the best episodes ever of this podcast, but also because it could not be more timely since it relates to a number of things happening on Broadway and in the world this week.

First and foremost, April 14th, the day this episode is being released marks the 62nd Anniversary of the Broadway opening of Bye Bye Birdie. This is a show that I don’t think gets nearly the respect it deserves, both in regard to its writing, and for the several important roles it played in Broadway history. As you will hear, this “Best Musical” Tony Award winner was not only the first show to bring rock music to Broadway, It also marked the debuts of a remarkable young creative team that would revitalize Broadway in the 1960s and beyond.

Also, this episode’s in-depth look at the final decade of the Golden Age, at least as I define it, includes some discussion of Funny Girl. And, of course, the much talked about, and highly anticipated new revival of that show will open on Broadway on April 24th.

In the final section I focus on Fiddler On The Roof – which unfortunately also has a direct connection to current events.

As most regular listeners will know, this podcast is spinoff of in the history of the Broadway musical course that I teach at the University of Washington School of Drama. A few weeks ago, as Russia began its invasion of Ukraine, my students had just completed an assignment to watch the film version of Fiddler On The Roof. The next day I showed them a map of “The Pale of Settlement”. From 1791 to 1917 was the only section of Imperial Russia in which Jews were allowed to live, and it included all of modern day Belarus, Lithuania, and Moldova, parts of Poland, and much of Ukraine.

In fact, Sholem Aleichem, (the creator of the Tevye stories on which the musical is based) was born in a town about 8 miles south of Kiev, and the fictional town of Anatevka was based, in part, on a town called Boyarka that is about 14 miles south of Kiev. And, as you will remember, “Perchik”, the young revolutionary student who marries “Hodel” is from Kiev, and after the wedding he returns there to join what is called “the first Russian revolution”, during which he is arrested and sent to a work camp in Siberia.

The final images in the film of Tevye and his family being forced to leave Anatevka closely paralleled the photos and video that my students had been seeing of Ukrainian refuges being forced to flee their homes. Of equal impact was the moment in which Tevye tells the Russian constable, "I have some advice for you. Get off my land! This is still my home, my land. Get off my land!"

It never ceases to amaze me how much ongoing resonance these silly Broadway musicals continue to have.