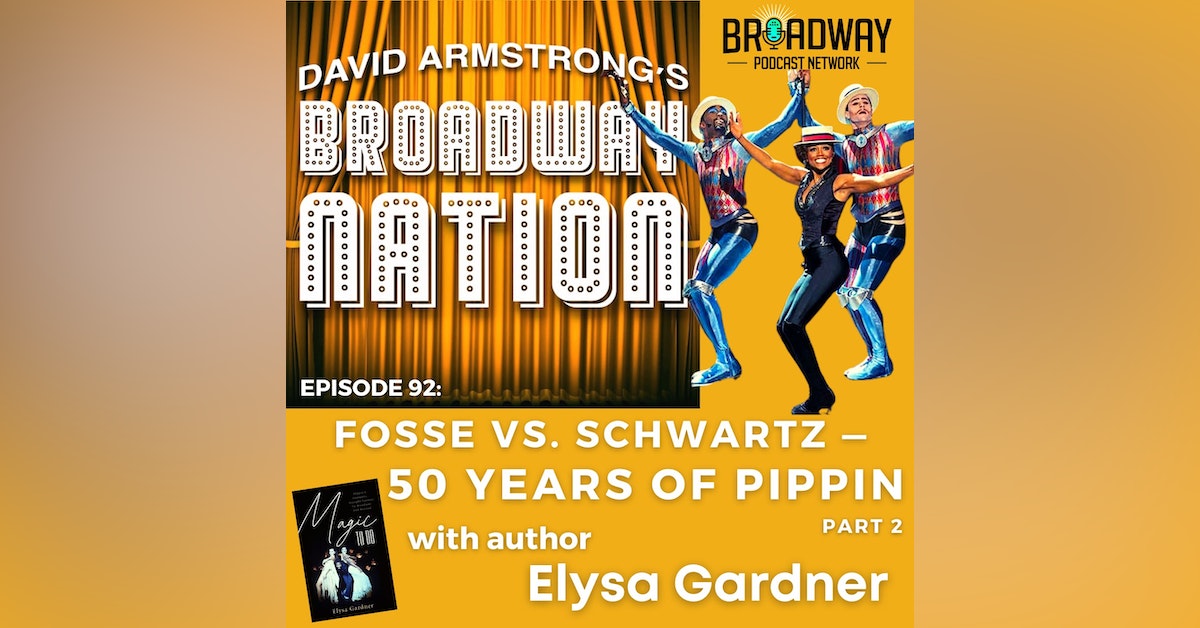 With special guest Elysa Gardner, author of the new book "Magic To Do — Pippin’s Fantastic, Fraught, Journey To Broadway And Beyond"

This is the second half of my conversation with author Elysa Gardner whose new book is titled:

Magic To Do — Pippin’s Fantastic, Fraught, Journey To Broadway And Beyond.

On our previous episode Elysa shared the story of how PIPPIN’s composer & lyricist, Stephen Schwartz, first began work on the show when he was a student at Carnegie Tech (soon to be Carnegie Mellon) University, where an early and very different version of PIPPIN was first produced. After graduating and returning home to NYC Schwartz began creating an all new version of the show but quickly got sidetracked by Godspell.

The massive success of that little Off-Broadway musical and its chart topping hit song, coupled with his high profile collaboration creating lyrics for Leonard Bernstein’s MASS moved Stephen Schwartz into the front ranks of musical theater songwriters, and quickly led to PIPPIN being optioned for Broadway with a new book by Roger O’Hirson, and to be directed & choreographed by then five time Tony Award winner Bob Fosse.  This set the stage for a now legendary backstage power struggle between the 23 year old wunderkind composer and the masterful Broadway showman and hitmaker.  And that’s where we pick up our conversation today.

Somehow their contentious and difficult collaboration produced one of the most popular, long-running, and influential musicals of the Modern Era, and later in the episode Elysa and I explore the now 50 year legacy of PIPPIN, especially how it has served as a tremendous inspiration to several generations of Broadway show makers such as Jeanine Tesori and Benj Pasek & Justin Paul, and how it paved the way to the pop music inflected musicals of today.

If you find this podcast to be extraordinary, I invite you to become a Patron of the show by joining the "Broadway Nation Backstage Pass Club".

For a just $7.00 a month you can receive exclusive access to never-before-heard, unedited versions of  many of the discussion that I have with my guests — in fact I often record nearly twice as much conversation as ends up in the edited versions. And you will also have access to additional in-depth conversations with my frequent co-host Albert Evans that have not been featured on the podcast. And all patrons receive special “on-air” shout-outs and acknowledgement of your vital support of this podcast.

And If you are very enthusiastic about Broadway Nation there are additional patron levels that come with even more benefits.

To become one the very first members of the Broadway Nation Backstage Pass Club and receive all of these exclusive member benefits – just click on this link:

Thank you so much for your support!