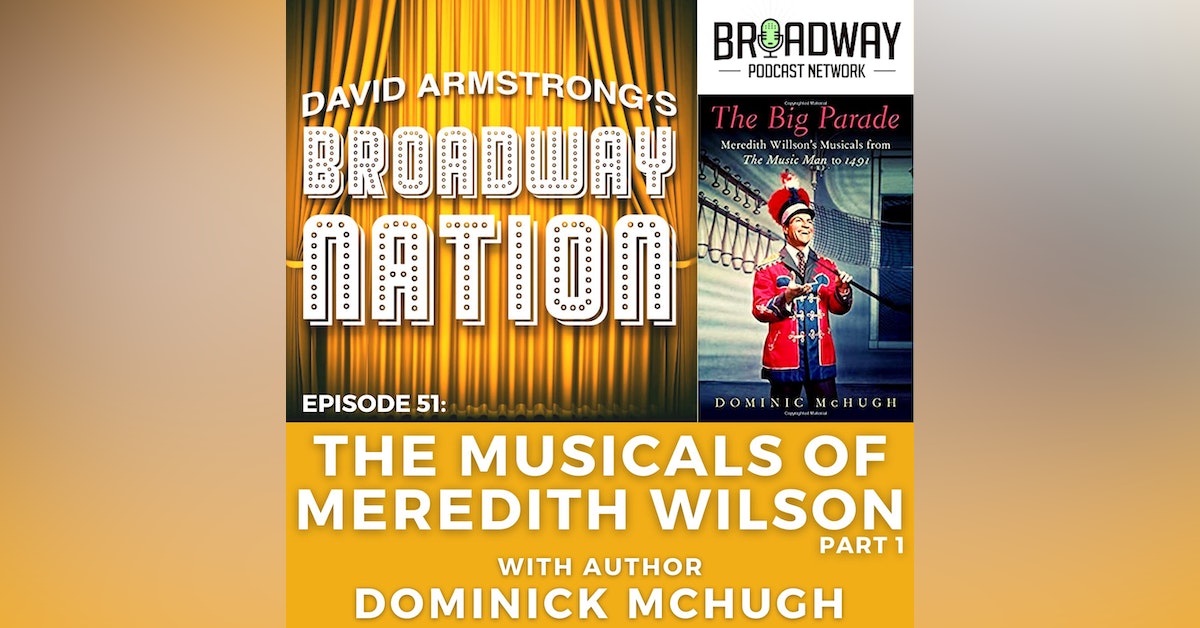 This week my guest is author Dominick McHugh, author of the recent book, The Big Parade – Meredith Wilson’s Musicals From The Music Man To 1491.

Dominick is Professor of Musicology at the University of Sheffield in the UK. His previous books include Loverly, The Life And times of My Fair Lady, Adapting The Wizard Of Oz – Musical Versions From Baum To MGM And Beyond, and he has also served as editor of The Letters Of Cole Porter, and The Complete Lyrics Of Alan Jay Lerner.

As it turns out, the timing of this episode couldn’t be more perfect since, after being derailed when both of its stars contracted COVID, the big, new Broadway revival of The Music Man, starring Hugh Jackman and Sutton Foster is supposed to return to Broadway tonight!

Many listeners will know by now that The Music Man is one of my all-time favorite musicals, and one that I consider to be one the greatest musicals of all-time as well. This is a show that I know backwards and forward, inside and out. Over my career I have danced in it, choreographed it, produced it, lectured about it, and seen it countless times.

So, it was a great pleasure to discover in The Big Parade, and during this interview, so many remarkable and surprising things I didn’t know about the show. Especially the extraordinary challenges that Meredith Wilson grappled with during its development – including, as recently reported in the New York Times, his efforts to include a disabled character in the show who was in intended to be a major focus of the story.

Dominick also shares the story of Liza Redfield, who became the first woman to serve as the Conductor/Musical Director of a Broadway show when she took over that role during the original run of The Music Man.

And that’s only half of the book! The second half cover Wilson's three other major musicals, about which I knew even less, and we will discuss that in next weeks episode.

I found it fascinating, and I think you will as well.

This episode is made possible in part through the generous contributions of Backstage Pass Patron Level Members GARY FULLER & RANDY EVERETT. Thank you so much, Gary and Randy!

If you love this podcast and want to delve even deeper into the world of Broadway musicals, I invite you to become a member of the

For as little as $7.00 a month members will receive exclusive access to never-before-heard, unedited versions of every Season Two interview, and many from Season One as well! I often record at least twice as much conversation as ends up in the public episodes, and this includes additional in-depth conversations with my frequent co-host Albert Evans. You will also have the opportunity to ask us any questions about Broadway musicals that you would like to hear answered and propose topics you would like me to cover -- all of which I will incorporate into a special series of “Ask Me Anything About Broadway” episodes. Last, but certainly not least, you will receive special “on-air” shout-outs and acknowledgement of your vital support of this podcast. And if you are feeling especially enthusiastic about Broadway Nation there are Patron and Producer levels available as well.

Thank you all so much, and welcome to the club!

Special thanks to Pauls Macs for his help in editing this episode, to KVSH 101.9 the Voice of Vashon, WA, and to the entire team at the Broadway Podcast Network.